Momentum Out of Iowa
When I lived in Minnesota a common good natured jibe by local wags was “the best thing to ever come out of Iowa is I-35.” Then Iowa cleverly devised a caucus format to usurp the first stop on the Road to the White House and any lingering traces of Hawkeye inferiority complex were obliterated.

For over the past year, candidates had been laser focused on the “all important” Iowa caucuses. This election cycle yielded a bumper crop of initially 17 Republican hopefuls, and three Democrats–quickly reduced to two determined, well staffed and financed contenders. They were a significant boost to the state economy. Monday night the votes were tallied—or settled by flipping a coin.

After wiping away the hype, it becomes clear the Iowa campaigns were important. They are a new milestone in the ongoing disintegration of stable political order in the USA. They confirm trends polls have consistently found over the past three years—Americans have become estranged from the two Establishment parties and most would like to see a new one.

So far we have not yet seen a new party. But polarization both right and left has caused consternation for those moderates who have traditionally run the twin parties of Big Business. The far right, posing as “outsiders,” largely financed by rogue billionaires, often openly appealing to bigotry, now clearly dominate the GOP–and the viability of that party has to be questioned. Republican former Mayor of New York Michael Bloomberg, who is at least as rich as Donald Trump, has said he may run as an independent if the conventions select Trump and Sanders. 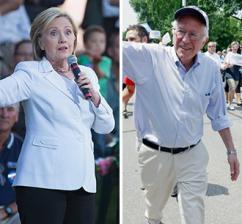 Senator Bernie Sanders, an “independent” and self-styled socialist, has skillfully tapped the more numerous left polarization bringing disaffected youth, and also many discontented trade unionists together—not to form a new party but to put him at the head of the oldest one.

As he strives to become the oldest to ever be elected to a first term, the bulk of the claimed 200,000 volunteer foot soldiers in his Revolutionary army are Millenials. Bernie—as he has become known to all–has raised almost as much money as his Wall Street backed opponent through small donations averaging 27 dollars. After a slow start, Bernie has recently received some high profile African-American endorsements such as former NAACP head Ben Jealous and activist actor Danny Glover. He has even made inroads in to a base Hillary Clinton assumed she owned—a majority of young women back Bernie. And for refreshment, as well as fund raising, his good friends Ben and Jerry have created Bernie’s Yearning ice cream.

As regular readers know, scar tissue has blocked me from Feel the Bern. I’m still not moved just because he came within three tenths of a percentage point of being the first to cross the finish line in Iowa and will likely claim victory in New Hampshire on Tuesday. But while it’s not my race I do care about those millions who keep laying down three dollar bets on Bernie.

Obviously, Bernie’s backers are not infected with ageist prejudice or antisemitism. They are attracted to his less than charismatic agitation around a few urgently needed reforms that emerged from focus groups such as single-payer health care, free public college education, and a 15 dollar minimum wage. They also like his somewhat more vague identification with the need to act on climate change. They are not the least bit frightened of the old taboo against socialism. They think he can win–but they support him out of conviction not out of belief that winning is the only thing that matters.

This is not chopped hummus. No guarantees, but it may prove to be an early blurry sighting of an incipient radicalization that could broaden and survive beyond this election cycle. Bernie did not create this situation but we should give his campaign their due—they mobilized this sentiment to their advantage.

Some readers continue to ask, why shouldn’t those of us who think this stirring of workers and students is a good thing jump on Bernie’s bus—like the red livery one used by National Nurses United who play such an exemplary role in the labor, climate and other social movements?

I’m not authorized to speak for anybody else but my short answer to the question remains—this bus is going to be diverted to a detour leading to a dead end in Philadelphia in the last week in July. Like many before them, going back to at least the Populist movement in the nineteenth century, the passengers being taken for a ride by Bernie will be delivered to the undertakers of the Democrat convention. The corporal presence of Political Revolution will give up a Casper-like ghost to serve the nominee of the present governing party of the ruling class.

I think those of us who have been around the block a few times have an obligation to those just becoming politically aware to share the lessons that we and/or our “ancestors” have at times painfully learned. We should do this in a friendly, fraternal spirit, aiming for dialogue where we also listen and learn–rather than preaching repentance to sinners.

It is better we do this now rather than waiting til August. I’d rather be remembered as one of those who gave unwelcome but accurate and timely warnings instead of later facing the question—why are you just telling us now when it’s already too late?

That’s my short answer. The dialogue I suggest requires a number of longer questions and answers—more than can fit in a single edition of the WIR. This will be a recurring topic over the next several months. Stay tuned—and feel free to jump in.

First Responder
The first response to my invitation for comments on climate issues came from a supportive California reader,

“There is a lot of heat around global warming but not much light. Don’t you think it would be good to publish a simple explanation of scientific thinking on the subject? It isn’t simple you know. Also before you push for more windmills you should consider perfecting nuclear. I think otherwise you will be tilting at windmills.”

Explaining the many facets of climate change to those without a scientific background is challenging. I should know because I fall in that category. Climate change was not mentioned in my high school General Science class.

But just as we need not know all of the scientific principles governing internal combustion in order to drive a polluting car, scholarly initials following our name are not required to tackle the cause and ramifications of global warming. There’s a fair amount of popular literature, and animated video, explaining climate science, human culpability for the crisis, and proven countermeasures we can take.

For those up to taking book length bites, Naomi Klein’s Capitalism Versus the Climate: This Changes Everything, is an excellent source for both science and politics. Ian Angus publishes useful current reports and articles on his Climate & Capitalism site. Trade Unions for Energy Democracy has packed a lot in to a short video animation. And I collaborated with Carl Sack, a budding young scientist at the University of Wisconsin, on a pamphlet, The Fight for Class and Climate Justice, that was published by Socialist Action. MayDay Books in Minneapolis has an extensive selection of climate related literature–and will do mail orders.

Of course, the flow of such material suitable for the general working class public needs frequent updating and that remains a constant challenge.

Our reader also thinks the pace of renewable energy is too slow to prevent climate disaster and nuclear power needs to be expanded as a transitional way of reducing greenhouse emissions. This is a position he shares with the dean of climate scientists, Jim Hansen. Though I respect both, I can’t agree for several reasons.

¶ Nuclear fuel is not renewable—God is not making any new uranium.

¶ Accidents are inevitable in any industry but at nuclear plants they can be catastrophic.

¶ And last but certainly not least, there is no known way of safely disposing of radioactive waste that can remain deadly to humans and other life for centuries.

Fortunately, clean, renewable energy is sufficiently advanced to be ready for rapid conversion from both fossil and nuclear sources. The obstacle is not technology or resources—it’s global capitalism.

In Brief…
* The “serious offer” by Chicago Public Schools to the Chicago Teachers Union mentioned in the last WIR turned out to be more an ultimatum assuring war. After the CTU Big Bargaining Committee rejected the concession-laden offer CPS promptly announced plans to layoff a thousand CTU members, and impose a seven percent pay cut. The union immediately responded with a mass rally in the financial district—aimed at the banks directing the austerity demands their servants at CPS and City Hall are ruthlessly implementing–that our Chicago correspondent reports drew at least three thousand.
* When the going gets tough—the banks get tougher. In Flint, where folks still get billed for water they can’t drink, Bank of America and Wells Fargo each have said they will not approve any housing loans unless the owners can prove through extensive testing that their water is not contaminated.

If you want to be on our new e-mail list send your name and e-mail address to:
billonasch@kclabor.org