Trouble Top to Bottom
Whether your pole of attraction is in the Arctic or Antarctic it is in big trouble. Both are stressed out by that unwelcome, unintended consequence of the Industrial Revolution—global warming. Of course, so is the rest of the planet in between. But the long frigid areas associated with the poles have been particularly vulnerable to the inexorable rise in average global temperatures—July was the hottest month in recorded history.

In turn both regions have an enormous impact on the world’s weather, water temperatures and currents; as PermaFrost thaws the most potent of all greenhouse gas, methane, is released; melting sea and shore ice in the Arctic and Southern Oceans and receding once giant ice shelves in Greenland and Antarctica, contribute to rising sea levels.

These forces were the perfect backdrop for President Obama’s recent visit to the 49th state to pitch the re-launch of his “climate action plan.” The educational theater of the President’s journey to Alaska was commendable—but his plan not so much.

The very structure of the President’s plan is shaky. It’s legal authority relying on executive order is already being challenged and in any case could be reversed with the stroke of a pen by the next, or any future President, short of its objectives. It is restricted to reducing carbon emissions only in the electrical power industry. It relies on cooperation of states in determining and implementing quotas—much like the Affordable Care Act.

The goals of this American plan, submitted to the COP21 Climate Summit meeting in Paris in November, aren’t much to write home about either. It does not begin with the benchmark of the expiring 1997 Kyoto Accord that the Clinton-Gore administration helped shape—but never submitted to Congress for ratification. It instead projects a 32 percent reduction in power plant emissions by 2030 from the much higher starting point of 2005.

This past decade has, of course, been marked by an astounding conversion of power plants from coal to gas-fired. Gas belches only about half the carbon emissions of coal. The motive of the utilities has not been a desire to go green. Hydraulic fracturing (fracking) methods produced a glut of gas that became cheaper than coal—at least for now. It is this low hanging fruit that makes the 32 percent reduction credible. In fact, a number of states have already met their 2030 target.

Fracking is a process that itself generates substantial emissions and a host of other environmental problems. But since the plan is restricted to what goes up the stack at power plants fracking of gas and oil is ignored.

So is the President’s authorization of new offshore oil and gas drilling. Especially egregious is the permit granted to Royal Dutch Shell to drill in the fragile marine environment of—Alaska. This has provoked just outrage by indigenous peoples in the area and mass demonstrations and civil disobedience at Shell’s bases in Seattle and Portland.

“James Hansen, a climate researcher who headed NASA’s Goddard Institute for Space Studies for over 30 years and first warned Congress of global warming in 1988, said of the new plan: ‘The actions are practically worthless….They do nothing to attack the fundamental problem.’ A recent study published by Hansen and 16 of his colleagues concludes that glaciers in Greenland and Antarctica will melt 10 times faster than the IPCC [UN science body] estimates, resulting in sea level rise of at least 10 feet in as little as 50 years. If true, coastal cities like New York and New Orleans have but a few decades of habitability left.”

In 2009 a UN goal of limiting global warming to 2 degrees centigrade (3.6 Fahrenheit) above pre-industrial levels was adopted. Many nations objected that was too high. Even 2C will cause serious localized irreparable damage. Above 2 will be widespread disaster. Right now we are on a path leading to well over 3C by the end of the century. No one is confident that the binding agreements, if any, adopted in Paris will be sufficient to achieve the 2C target.

350.org has devised a program around a theme of Through Paris, projecting actions before, during, and beyond COP21. Next time I’ll take a look at this and other needed projects that must involve the working class to save our biosphere.

Your Choice—Shape the Future
An odd thing happened after the drubbing of the British Labor Party in last May’s General Election. You might expect there would be mass defections from the hapless losers. Instead there was a surge of tens of thousands of eager new members signing up. It soon became clear they were not yuppies seeking to make the New Labor project launched by Tony Blair twenty years ago even more respectable—and acceptable to the British ruling class. Quite the opposite. They seemed determined to restore the party’s working class, antiwar, socialist heritage that peaked before most of them were born.

In the Your Choice—Shape the Future contest to select a new party leader they rallied around a veteran backbench Member of Parliament. Jeremy Corbyn is a left wing socialist, national chair of the Stop the War Coalition, and a protege of the late Tony Benn. On Saturday the results of the four-person race were announced. Corbyn won an astonishing 59 percent first ballot victory—greater than Tony Blair’s 1995 triumph. 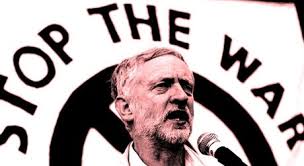 Corbyn wasted no time in setting the pace and tone of the new sheriff in town. Shortly after giving a victory statement Corbyn joined a mass rally in Parliament Square, in solidarity with the refugees from wars in the Middle East and Africa seeking asylum in Europe, where he also made some brief remarks. He was immediately followed by Billy Bragg singing the Red Flag.

Of course, Corbyn is now only the leader of Her Majesty’s Opposition, not the Prime Minister. But that’s not chopped tofu. He will be confronting the Tory PM in the few holds barred Questions period in the House of Commons. Unlike his tip-toeing predecessor Corbyn can be expected to hit hard on questions of war, austerity, and immigration. He is also likely to continue his support to struggles outside parliament such as strikes and demonstrations. The BBC put together a good summary of Corbyn’s views on 24 important questions, worth reading.

Some are trying to compare Corbyn’s success to what Senator Bernie Sanders is trying to do in the Democrats. They just don’t get it. Though both call themselves socialists as they appeal especially to young people Corbyn is not leading them in to the boss Liberal party. He has devoted his life to a real labor party, not a phony one. To be sure, New Labor in Britain looked a lot like the old American Democrats. Corbyn’s victory signals the old working class party is not dead.

Is this a flash in the pan or a sustainable revival? We will want to eat a lot of pudding in search of proof one way or another. But we should also keep in mind another proverb—strike while the iron is hot. That will be especially applicable for the British working class. But the upsurge there can put some wind in the sails of class aware workers in North America as well.

That’s urgently needed in the USA where we desperately need a mass party of our own.