Hip Hype
Stellar Performance. Solid Growth in Jobs and Wages. Those were typical headlines about the January Employment Situation report released by the BLS on Friday. But unless you read Fortune, you didn’t see this headline, “Job cuts soared as the U.S. energy sector, particularly in Texas, trimmed payrolls.”

These January cuts are not related to the strikes at refineries that began eight days ago (more on the strike below.) Forty percent of these layoffs are directly attributed to a glut in supply and collapse in oil prices—and this is likely just the beginning according to the Fortune article and other sources,

“Lower oil prices also led to job cuts in the industrial goods manufacturing sector, which supplies materials to oil drillers. Schlumberger, Baker Hughes, Halliburton and ConocoPhillips are among the firms that announced job cuts last month… ‘We may see oil-related job cuts extend well beyond those industries involved with exploration and extraction,’ said John A. Challenger, CEO of the outplacement firm. He warned the retail, construction and entertainment sectors in regions that have benefited from the oil boom could face challenges.”

You probably did hear about yet another anecdotal cloud over Morning in America redux, as reported in the Thursday New York Times,

“For years, RadioShack — the retailer that helped bring personal computers to the masses — outlasted untold predictions that it would buckle in the face of bigger rivals and online competitors. But its clock has finally run out. RadioShack, a long-ailing 94-year-old electronics chain, filed for bankruptcy protection on Thursday after striking a deal to sell up to 2,400 of its stores to the wireless service provider Sprint and a hedge fund that is its biggest shareholder.”

Sprint, which has laid off thousands of its own workers during “recovery,” has not yet indicated
its plans for the current Shack workforce.

On a smaller scale, ConAgra is closing the RyKrisp plant in Minneapolis. Currently the only plant making the best platform for Limburger cheese, this means the end of a storied brand that began in St Paul in 1899 as well as permanent job loss for members of Local 22 of the Bakery, Confectionery, Tobacco Workers and Grain Millers union.

The “real” unemployment numbers, that include the involuntary part-time and marginally attached to the workforce categories added to “official” unemployed, remain about eighteen million.

Most news accounts report the average wage went up twelve cents an hour in January. But this is using a skewed average that encompasses virtually everyone in the private sector including management and professionals with seven or more figure annual earnings. A more accurate measure of typical wage workers is the “nonsupervisory and production” average. The January gain for our group was seven cents. In December we lost six cents—so are today a penny an hour ahead of where we were in November. Don’t spend it all in one place. 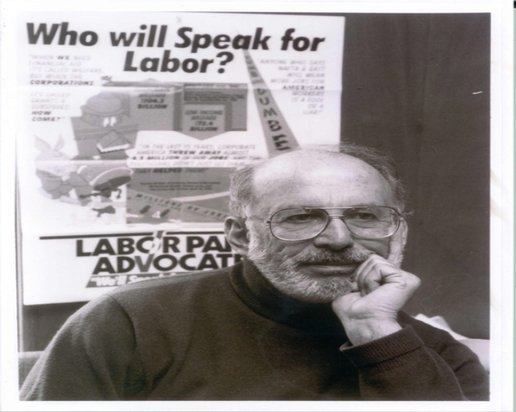 “As a top strategist for the Oil, Chemical and Atomic Workers (OCAW), Mazzocchi pioneered alliances between workers concerned about job safety and health hazards and communities exposed to industrial pollution generated by companies like Shell, Chevron, and Mobil.

“In 1973, members of the OCAW (who are now part of the United Steel Workers) conducted a national contract campaign and four-month strike at Shell Oil over workplace safety rights and protections. As Mazzocchi’s biographer, Les Leopold notes, ‘the strike helped build a stronger anti-corporate movement’ because OCAW members learned ‘that you can’t win these fights alone.’ To win—or even just battle Big Oil to a draw—workers had to join forces with the very same environmental organizations long demonized by the industry as the enemy of labor and management alike.

“Four decades later, echoes of that struggle could be heard on the refinery town picket-lines that went up in northern California, Texas, Kentucky, and Washington state this week. Thousands of oil workers walked out, for the first time in 35 years, over issues and demands that Tony Mazzocchi helped publicize and build coalitions around for much of his career.”

These initial nine facilities were joined by two more in Whiting and Toledo yesterday and may well go national, affecting plants that produce about two thirds of the nation’s refined petroleum. If that happens it could be a long one with salaried workers getting dirty trying to keep the highly automated plants running for perhaps a few months without blowing them up.

Marathon bosses got an undeserved boost when building trades unions doing work at their Catlettsburg, Kentucky facility announced they would return to their jobs today after honoring picket lines last week. This comes as no surprise as many of the well compensated bureaucrats in the Trades still resemble the Wobbly cartoon figure Mr Block.

But solidarity was quick to come on other fronts. The Labor Network for Sustainability issued a statement that began,

“The Labor Network for Sustainability today called for environmentalists and other allies of organized labor to support oil refinery workers who went on strike this week. Joe Uehlein, Executive Director of LNS, said, ‘Oil refinery workers are in the front line of protecting our communities against the environmental hazards of the oil industry. Their skill and experience is critical for preventing devastating explosions, spills, and releases. The oil companies are creating conditions that make it impossible for refinery workers to protect us. Their strike is about making conditions that are safe and healthy for workers and communities. They deserve the support of environmentalists and everyone concerned about the rights and wellbeing of working people.’”

“This work stoppage is about onerous overtime; unsafe staffing levels; dangerous conditions the industry continues to ignore; the daily occurrences of fires, emissions, leaks and explosions that threaten local communities without the industry doing much about it; the industry’s refusal to make opportunities for workers in the trade crafts; the flagrant contracting out that impacts health and safety on the job; and the erosion of our workplace, where qualified and experienced union workers are replaced by contractors when they leave or retire.”

Thirty years ago the old OCAW made a powerful short film about the workplace and environmental record of the oil industry entitled Out of Control. The USW has now made a sequel—Still Out of Control—worth watching.

As part of emergency measures needed to stop climate change the WIR has long advocated the nationalization of the entire energy industry and operating it in society’s interest, under worker management, guided by science. That’s the most effective way to truly tame the out of control bosses; the arena for beginning rapid conversion from fossil and nuclear fuels to clean renewable sources–and that’s how we can guarantee a Just Transition that leaves no worker behind.

We’re not there yet and until we have a strong mass movement and a party of our own to reach that goal unions remain our primary form of self-defense. Hats off to Steve Early for reminding us of the Mazzocchi legacy. We also should emulate as well as applaud the example set by the Labor Network for Sustainability in forging labor-environmental solidarity with embattled oil workers today.

In Brief…
* The National Retail Association condemned both the Pacific Maritime Association bosses and the International Longshore and Warehouse Union, for ever growing delays in getting both imports and exports through 29 congested West Coast ports—especially Los Angeles-Long Beach and Oakland. The port bosses blame an alleged union slow down while the union charges incompetent port management. The PMA canceled dock work this past weekend and has threatened a lockout. According to AP, “The union responded to his lockout warning by saying that while a contract deal was close, it would not be bullied.”
* In his two widely separated stints as Governor of California, Democrat Jerry Brown has cultivated a green reputation. But an AP story notes, “in his second go-around as governor, conservationists are among his harshest critics…. because he has refused to ban hydraulic fracturing for oil, protesters, or ‘fracktivists,’ have dogged Brown for more than a year, even interrupting his speech at the Democratic Party convention last spring. ‘Climate leaders don’t frack,’ said Kassie Siegal of the Center for Biological Diversity, a group that praises Brown’s programs to boost renewable energy. ‘The oil and gas boom threatens to undercut all the other progress that our state may make on climate.’” Thousands, including an impressive labor contingent, turned out Saturday for a Don’t Frack CA march in Brown’s hometown of Oakland.
* Yourerie.com reports, “General Electric is interfering with the free speech and labor rights of more than a thousand workers at its diesel engine factories here, according to a complaint issued this week by the National Labor Relations Board (NLRB)…The NLRB complaint, which cites multiple labor law violations by GE, is scheduled for a hearing in Pittsburgh on March 25. The violations alleged include prohibiting the posting and distribution of information about labor unions and interfering with workers’ plans to conduct a secret-ballot vote on GE’s overtime policies. ‘We’re happy to see the Labor Board standing up for our rights,’ said Steve Gallagher, president of UE Local 601, Grove City United Employees. ‘The right to free speech and the right to organize are basic American rights that GE should respect.’”

Free digital subscription to the Week In Review is also available through RSS
Check out our digest of news stories about working class and climate issues, posted Monday-Friday by 9AM Central. on our companion Labor Advocate blog.
Our sole source of operating income is reader contributions. If you can help please visit the KC Labor Donate page.