A Great Victory Shared With Others

The “illegal” strike by 35,000 West Virginia teachers and other school employees didn’t get an immediate permanent fix to the underfunded state worker health insurance scheme they had sought–but they did win a freeze on insurance premiums as the legislature works on a new insurance structure. 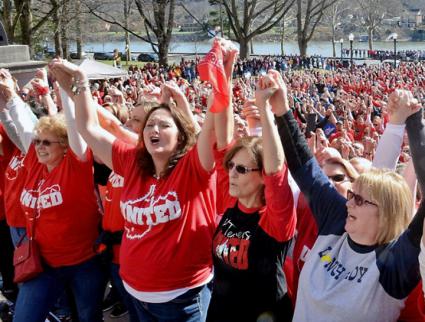 When the boss politicians branded the teachers as “selfish” for wanting bigger raises than other state employees they had an appropriate response—give all state workers a five percent raise—and that’s what they settled for. When the Governor announced the new tentative agreement to hundreds of teachers maintaining their daily vigil at the Capitol a spontaneous chant broke out—put it in writing. They in fact didn’t return to work until an expedited session of the legislature approved the deal and the Governor signed it.

A union that I was once part of expressed thanks for this solidarity in a statement by the United Electrical, Radio & Machine Workers (UE) who represent–but cannot legally bargain for–some public workers who will benefit,

“We are grateful to the determination and solidarity shown to us by our fellow public workers,’ said Jamie Beaton, President of Local 170. ‘Coupled with the commitment to secure full funding for PEIA, the action of school district employees represents an historic milestone. For too long the politicians have tried to pit the interests of school employees against state workers,’ added Beaton. ‘From now on, both county school and state employees will act together to advance the working conditions that we have in common. Fixing wages and health benefits will no longer be deferred by dividing us, and we have the rank and file members of WVSSPA, ATF-WV and WVEA to thank for changing the game.”

As the schools reopened, 1400 members of Communications Workers of America Local 142 walked off their jobs at Frontier Communications, a major Internet and TV provider in West Virginia.

My friend Ann Montague, a long time leader in a state employees union in Oregon, sent me a link to a story in the Tulsa World, headlined Schools Will Stay Closed Until We Get What We Are Asking For, Oklahoma Teachers Union President Says. West Virginia had been 48th in state teacher salaries—Oklahoma is dead last. The State NEA has given the legislature an April 1 (no fooling) deadline to come up with an acceptable raise to keep the schools open.

In Arizona, rank-and-file teachers sported red shirts as part of a #RedForEd movement that is discussing a possible strike.

There was a “walk-in” action in Minneapolis where MFT teachers impatient with seven months of contract negotiations, rallied outside their schools before marching as a body in to their classrooms.

The inspiring West Virginia strike victory that was in the national headlines over its duration took place in a most hostile union environment. West Virginia has no public employee labor law but does have a “Right-to-Work” law banning union shop agreements in the private sector. The state voted for Trump and has a Republican Governor and a GOP controlled legislature. Too many unions feel helpless in RtW states and some public sector ones appear ready to throw in the towel when the Supreme Court Janus ruling is announced, perhaps as early as this week.

The AFT-NEA success shows unions can still win if they fight. And while strikes have been in decline for decades they remain a powerful weapon in the workplace arsenal long overdue for revival.

Most lawyers retained by unions focus on warnings of what’s illegal. Since the USA has the most oppressive labor laws of any major capitalist country that usually doesn’t leave much. But some attorneys are more flexible.

The lawyer used by UE Local 1139 in Minneapolis when I was local president during a series of strikes in the 1970s had a wry sense of humor. He would assure us that if we were arrested on the picket line he’d get us out of jail even if it took twenty years. But he was dead serious and effective in helping us defy injunctions and maintaining spirited picket lines.

Joe Burns is a special kind of labor lawyer. He is a skilled negotiator who is a firm believer in the strike weapon–even when forbidden by law in the public sector. He wrote a valuable book, Strike Back: Using the Militant Tactics of Labor’s Past to Reignite Public Sector Unionism Today. Perceptive comments by Burns while the West Virginia school strikes were still in progress were cross-posted on Jacobin and Labor Notes. After acknowledging the “illegality” of the state-wide strike he goes on to write,

“During the high point of the 1960s and ’70s public sector strike wave — when millions of government workers were involved in work stoppages — unionists had a slogan: ‘There is no illegal strike, just an unsuccessful one.’ Lawmakers could impose draconian penalties, courts could issue injunctions, and the corporate media could fulminate endlessly. But if the strike was strong, if the cause was just, and if community support was robust, harsh penalties were rarely imposed.” Both the article and book are worth reading. I expect Joe Burns will be at the Labor Notes Conference in Chicago April 6-8. For sure some of the heroes of West Virginia will be among the 2000+ in attendance. I’ll be there and I hope you will be too.

Careful What You Ask For

At a 1847 Free Trade Conference in Brussels a young Karl Marx declared himself a supporter of Free Trade, with some caveats, as opposed to protective tariffs. With some additional reservations in the present era of Globalization, that remains the view of most socialists today.

Marx noted workers in protected industries received no better wages and the ability of workers in all industrializing countries to improve their conditions would be enhanced in the long run by economic growth accompanying free trade. This internationalist class perspective is what separates socialists from pro-capitalist Free Trade economists whose mission is to serve their own national ruling class.

Of course, capitalism is not always in growth mode. There are cycles of recession and at times depression. In the 1930s the Great Depression hit virtually all major industrialized countries at the same time and lasted a decade. Only the Soviet Union, with its nationalized planned economy and state monopoly of foreign trade, continued to grow. In desperation, national ruling classes established protective tariffs. This led to “trade wars”—which were a major contributing factor leading to the most bloody war in human history.

That war produced full employment in greatly expanded industrial capacity in the USA and Canada while much of basic industry was destroyed in Europe and Japan. That made them captive customers for North American factories as they rebuilt during the first two decades of the postwar period.

American companies cranked out goods for foreign and domestic markets with aging plants while their European and Japanese competitors—later joined by a restored capitalist China–rebuilt with the latest, far superior technology. Nowhere was this more apparent than in steel. That couldn’t be long sustained.

Beginning in the 1970s, the American steel industry went through a massive restructuring. The old open hearth mills were finally closed, replaced with new technology, and major companies went bankrupt. Currently there are only eight U.S. plants—some “foreign” owned–producing steel from iron ore. There are another 100 or so “mini-mills” that recycle scrap steel in electric furnaces. Between them they produce about as much steel as ever—but with far fewer workers.

The United Steelworkers couldn’t resist new technology any more than coal miners, rail workers or longshore unions could. But they adapted some of their “fair trade” arguments raised in the fight against NAFTA to use against Chinese imports. They had some success in winning relief from the World Trade Organization on Chinese “dumping” of cheap tires. The Obama administration had filed a similar WTO complaint about steel. Recently Steelworker president Leo Gerard and AFL-CIO president Richard Trumka asked Trump to pursue this action more vigorously.

But appeals to Trump for help are as effective as requests to my wife’s cats not to jump up on the table while we’re eating breakfast. President 45 used the union complaints as a wedge for his America First appeal to dissatisfied workers. Instead of a penny-ante WTO complaint involving only about a 2 percent slice of the American market he ignored all advisers and slapped a 25 percent tariff on steel and 10 percent on aluminum, applying to almost every exporting country. Tentative dispensation was granted to Canada and Mexico pending outcome of Trump’s demand to renegotiate NAFTA, along with some staunch allies like Australia and the new right-wing regime in Chile. To cover his backside in the WTO, he declared steel to be vital to America’s security.

Far from denying this was a trade war, Trump reveled in bombast that such wars are “easy to win.” He quickly assembled a few lads and lasses dressed in blue collars to witness his calligraphic flourish on his declaration of war.

But perhaps most upset of all was the mainstream American ruling class. They were prepared to ignore Trump’s often irrational behavior as long as he followed through on tax cuts—though now revealed to be plagued with numerous errors and contradictions–deregulation, and didn’t screw up economic recovery. They see nothing to gain and much to lose in trade wars.

To achieve fair trade requires cross-border collaboration of workers—not with our employers or “our own” capitalist governments. This topic, including a fresh look at trade and investment zones like NAFTA and the European Union, will be explored further in future editions of the WIR. And I believe this naturally ties in to issues like Just Transition and a deferred but not forgotten working class infrastructure policy.