Last Year and This 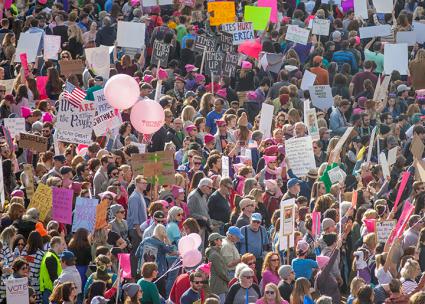 Last year’s Women’s Marches on Trump’s first full day in the White House were the biggest nationally coordinated political demonstrations in U.S. history and inspired solidarity actions on every continent. Pulled together in less than two months, they were largely self-organized on the fly in local areas. For many, probably most, it was their first nonelectoral political action of any kind.

Their focus was ongoing struggles around “women’s issues”–such as defending the right to control their own bodies; fighting sexual harassment; the lack of affordable quality child care; and eliminating the gender pay gap. But they were not alone in their sense of urgency sparked by the election of the most reactionary president in living memory–an exposed misogynist and racist to boot. Women were first in the queue of anti-Trump protests and attracted many from Black Lives Matter, peace, climate justice, immigrant rights, LGBT and union organizations—forces that also had some clashes with the Obama administration but were even more alarmed about the heightened threats of Trump.

Hillary Clinton and Barrack Obama have been seldom seen or heard from since the Democrats managed to lose another election in which they received the most votes. But that party’s liberal wing saw an opportunity to declare a “resistance movement” based on anti-Trump. Groups like Our Revolution, Democracy for America, the National Women’s Political Caucus, and more traditional opportunists like moveon.org, keep the “Resistance” busy with e-mail blasts about signing petitions, calling Congress, supporting good Democrat candidates (including some who are antichoice)—and above all fund appeals.

With these diversions receiving sympathetic attention from anti-Trump media such as the New York Times, Washington Post, and MSNBC, it was no surprise when the national leadership of this year’s marches chipped in with a theme tied to a “march to the polls” to advance the Resistance in the midterm elections.

They also decided that in so-called “Red States” it would be better to have fewer marches, concentrating on “blue islands in red states.” My blue island in Kansas City, where 10,000 rallied last year, didn’t make the cut. Those asking for our money told us to hit I-70 and head to a small campus town like Lawrence, Kansas or Columbia, Missouri.

This year’s marches were about half the size of last year. Still, half of four million isn’t chopped humus. A new article by Ann Montague justified its headline—Women’s Marches Get a Huge Turnout Nationwide. Totals in many major cities were impressive indeed—500,000 in Los Angeles; 300,000 in Chicago; over 200,000 in New York City; 60,000 in San Francisco and Philadelphia; and tens of thousands in D.C. were among the highlights of hundreds of events in the USA and another 200 abroad.

Montague goes on to describe many hand-made signs, speeches, and interviews that indicate there is no consensus among women activists around the Resistance doubling-down support to Democrats.

Montague is a veteran activist who experienced all the broken promises of the Equal Rights Amendment, and equal pay for comparable work, by the Democrats. She warns,

“This year showed that the uprising of women with the election of Donald Trump has continued and remains strong even in the smallest communities in the country. The Democratic Party will continue to attempt to ‘harness’ the movement and drive it into electing their candidates. They will try to bring women into a political system that has no answers for institutionalized sexism and racism.”

Ann Montague shed her “harness” long ago, becoming a socialist and a staunch Labor Party Advocate. Many more will likely take the same path in the struggles ahead.

Not Even Landing a Punch

Eduardo Porter, a leading economics writer at the New York Times, is no climate change denier. Far from it, instead of skepticism he is close to the pessimism of those who say climate change is now inevitable. His gloom and doom is expressed in Fighting Climate Change? We’re Not Even Landing a Punch.

Porter builds his case by examining international climate gatherings, beginning with the very first in Toronto in 1988 right through to the current accords adopted in Paris in 2015.

At the time of Toronto, the Earth’s average temperature had risen about .5ºC over measurements in the late nineteenth century, annual global greenhouse emissions amounted to 30 billion tons, and scientists suggested those emissions be reduced by 20 percent.

At the landmark Paris summit a little over two years ago, the planet’s warming had reached 1.1ºC and emissions had risen to nearly 50 billion tons. The two full years since Paris have set new warming records and emissions continue to climb as well.

“While the world frets over President Trump’s decision to withdraw the United States from the Paris agreement, I would argue that the greatest impediment to slowing this relentless warming is an illusion of progress that is allowing every country to sidestep many of the hard choices that still must be made.

“’We keep doing the same thing over and over again and expecting a different outcome,’ said Scott Barrett, an expert on international cooperation and coordination at Columbia University who was once a lead author of the Intergovernmental Panel on Climate Change.”

Porter proves his assertions about the already palpable failure of international diplomacy to even slow down global warming. But diplomacy is determined by governments. And nearly all governments—tiny Cuba being an honorable though hard pressed exception—serve the interests of the ruling capitalist class.

We have the science, technology, human and material resources available to restructure a planned ecologically sustainable world economy while providing an acceptable standard of living for everyone on this planet. But to start landing punches on climate change we have to first knock out its instigator and continuing perpetrator—capitalism. But that’s not an option you’ll ever see in the Business section of the New York Times.

Transportation recently surpassed electricity generation as the biggest source of greenhouse emissions in the U.S. That makes expansion of public transit more important than ever in tackling climate change. Safe, reliable, affordable transit has also historically been an important demand of the civil rights movement.

Next Monday, February 5—the next workday after the birthday of the late Rosa Parks who helped launch the pivotal Montgomery Bus Boycott that ended segregation in public transit–is Transit Equity Day. This initiative of the Labor Network for Sustainability is being co-sponsored by the Amalgamated Transit Union, Greenpeace, Jobs with Justice, Institute for Policy Studies, Sierra Club, 350.org, among others. You can find more information here.

I’m happy to report that I once again will be taking Amtrak to the Windy City for the biennial Labor Notes Conference. In recent years these gatherings have attracted thousands of labor activists from across the country—and the world.

Unfortunately, due to a tight budget, I won’t have the usual KC Labor table there. But I’m pleased my wife, Mary Erio, will be accompanying me for her first Labor Notes experience. I hope to see you there.

Besides the opioid pandemic and flu epidemic there are other new shake-ups in America’s health care system. After eliminating the “individual mandate” in the Affordable Care Act the Trumpites are going after the employer mandate that could lead to millions losing coverage. Drug giant CVS is acquiring Aetna, one of the biggest health insurers. And two of the richest men in the world, along with the CEO of America’s biggest bank founded by a former richest in the world, have announced a plan to provide health care directly to their employees. Amazon’s Jeff Bezos, Warren Buffet of Berkshire Hathaway, and Jamie Dimon of JP Morgan Chase provided few details in their Tuesday announcement.

* Reuters reports–“German industrial workers will start a fresh wave of walkouts at metals and engineering companies across the country late on Tuesday, labor union IG Metall said after last-ditch talks over wages and working hours failed to reach a deal over the weekend.”

* According to the Guardian, the 26-county Irish state will schedule a May referendum on reforming the present total ban of abortions.

* The St Paul Federation of Teachers has scheduled a strike authorization vote on Friday. The main issue in contention is class size.

* Harley-Davidson disclosed on Tuesday that it will close its Kansas City Assembly plant next year. The plant was opened with substantial government incentives in 1998 and once employed a thousand. About 800 current jobs will be eliminated while 400 new positions will open up in York, Pennsylvania. Last year Harley staged a photo op with President Trump sitting on an American icon HOG on the White House lawn. Shortly after, they announced the opening of a new plant in Thailand. The Steelworkers and Machinists share representation at the plant.