There’s a lot of stuff in the U.S. Constitution the ruling class doesn’t like but the Sixteenth Amendment ratified in 1913 is near the top of their gripes,

The Congress shall have power to lay and collect taxes on incomes, from whatever source derived, without apportionment among the several States, and without regard to any census or enumeration.

They especially detest the “progressive” form that it took—the more you make, the more you pay. Between the World Wars, most workers and many family farmers didn’t have to pay any income tax. During World War II, the nominal top rate for the wealthiest was 93 percent. Taxes haven’t been that “astronomical” since but the rich still resent being penalized for their success in exploiting us.

Unlike the ideological war on the “deep state,” vigorously pursued by the Trump administration, most fat cats recognize the need for an effective government that they control. It takes a lot to maintain the might of the one remaining super-power. They need courts and prisons to defend their property and keep the rowdy lower class in check. Their class benefits from subsidized research done at both public and private universities. It’s just that while spending what’s needed for what they perceive to be worthwhile they prefer that others pick up most of the tab. 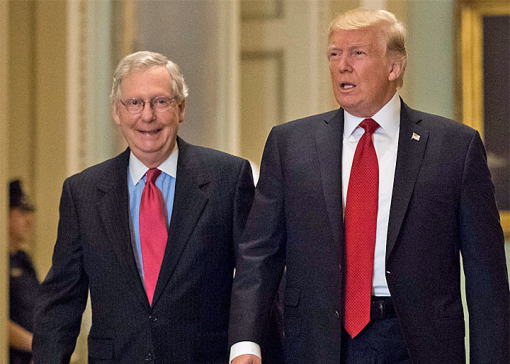 While all capitalists certainly welcome keeping more of the wealth that our class produces there has been no apparent urgent need for the nearly 500 page Senate “Tax Cut and Jobs” bill passed 51-49 in the wee hours of Saturday morning.

* The official unemployment rate is near a record postwar low.

* During the recovery from the Great Recession corporations accumulated a mountain of cash on hand of more than 2 trillion dollars. That didn’t stop some of the richest from accepting offered interest-free loans from Obama’s Federal Reserve.

* When they have spent some of this windfall it’s been mostly to acquire other big corporations and/or to buy back their own stock to reward the real owners.

There are few economists outside ultra-right “think tanks” who believe the melding of the Senate and House bills will stimulate sufficient new growth to compensate for lost revenue from corporate tax-cuts. Nor will the super-rich use their breaks to buy enough yachts, or build more mansions, to provide new “middle class” jobs. And the weekly paycheck gains for the typical middle class family of four will allow them to share a large pizza every week—though even that is temporary.

Most economists think substantial, sustained growth depends on raising real wages that have been stagnant for decades and transforming the growing “gig economy” in to real jobs with stable wages and needed benefits. Trump promises that corporations will share their permanent tax-cut windfall by raising wages. A New York Times piece reports a challenge to this pledge by the Communications Workers of America,

“‘President Trump and the Republican Congress have been trying to sell this corporate tax cut to working families by making big claims about wage increases, investment and job growth that don’t seem to be supported by the evidence,’ said Chris Shelton, the president of the union. ‘We’re going straight to the people who know how corporations plan to spend the billions of dollars being handed over to them — the C.E.O.s — and asking them if they intend to keep the promises that Trump is making on their behalf.’”

As could be expected, not a single top boss of any of the telecommunications, media, airline or appliance manufacturers CWA bargains with were willing to endorse Trump’s promise.

Present and past students are among the biggest losers in “reform.” Deduction for interest on student loan debt is eliminated. Grad student teachers and researchers who get their tuition waived will now have to pay income tax on its dollar value instead of just the usual modest cash wages they actually receive. Many such programs will no longer be viable—a loss that should also concern many capitalists whose industries depend on university research.

Many objectives of these bills go far beyond tax “reform.” For example,

> It advances Trump’s ecological warfare by opening up the pristine Arctic National Wildlife Refuge in Alaska to oil and gas drilling and with measures discouraging expansion of growing solar and wind energy vital to tackling climate change.

> A prize was awarded to theocracy allowing churches and synagogues to endorse, stump from the pulpit, and contribute church funds to candidates for office without losing their tax-exempt status.

> In another attack on public education, the Senate, with a tie-breaking vote by Vice-President Pence, allows tax-advantaged 529 savings accounts for college expenses to also be used for private and parochial K-12 schools and even home schooling. The House version also specified these accounts could be established for unborn children—“in utero.”

> The biggest conflict between the two versions is on health care. The House decided not to take another bite out of that sour apple. The Senate bill eliminates the so-called “individual mandate” that requires those who choose not to enroll in an available approved plan to pay a penalty when they file their tax return. Its impact is estimated to lead to 13 million more uninsured and a ten percent hike in insurance costs.

I admit that, like most members of Congress, I have not read the two bills in their entirety. The list of injustices and absurdities covered in the New York Times, Wall Street Journal, and the Guardian are too numerous to review in the WIR. Some will have to be modified for a common bill to be sent back to both houses. It’s possible the damage by the whole will be greater than the sum of its parts.

After inviting the minority leaders to the White House to discuss the legislation still being fleshed out, Trump sent out twits to his forty-some million followers denouncing the Dems for their many crimes and misdemeanors and declaring no deal with them was possible. When they understandably didn’t show, 45 posed for the cameras sitting between Chuck and Nancy’s two empty chairs.

But that feel good moment was probably the biggest favor he could have awarded the Democrats. Excluded from any input they needed only to follow Nancy Reagan’s advice to young people about drugs and premarital sex—just say no! They can’t take credit for weekly pizzas but they evade culpability for inevitable disasters.

Knowing their boss wouldn’t like the answers, Trump’s Treasury department didn’t bother to cost out either bill. The congressional bean counters of the Joint Committee on Taxation, after subtracting a very generous estimate of economic growth, predicts the Senate bill would add a trillion dollars to the deficit. One independent estimate goes as high as 1.39 trillion.

Leaders on both sides of the aisle know full well such hemorrhaging can’t be sustained for long. That suits the Republican ambition to pursue even much deeper cuts in useful public services, programs to help the poor—and the so-called entitlements such as Social Security, Medicare, and Medicaid.

Obama doggedly tried to convince the GOP to join him in a Grand Bargain of mutual protection while gutting entitlements. But visceral hatred of President 44 guaranteed that potentially historic victory for the ruling class would be rejected. The irrational, unpredictable behavior of President 45 precludes for now any bipartisan collaboration that remains the goal of the official opposition party.

Of course, there are Democrat Senators such as the “socialist” from Vermont, and the one vilified by Trump as “Pocahontas,” who say some good things on occasion. But they continually prove their loyalty to the boss party that is having more success than they have earned in preempting “resistance” to Trumpism.

The present bleak situation will become increasingly ominous until the working class builds a party of our own. The indicated foundation for such a structure remains our only class-based mass organizations—our unions. A Labor Party can be the advocate for the unorganized and the ally of the social mass movements, coordinating battles for class and climate justice in the workplace, the streets, and at the ballot box. We should accept no substitutes.

While ridership has been on the rise in recent years there is a veritable transit crisis in many American cities big and small. New York City’s subways moving 5 million passengers a day is on the verge of collapse and their buses aren’t doing much better. Washington DC has neglected even routine maintenance on the Metro and is moving to privatize the Red Line. Union negotiations remain highly contentious in Chicago and the Twin Cities.

But the most hopeful communication I received last week was a brief one from the Labor Network for Sustainability announcing a Transit Equity Day February 5. The initial save the date call is sponsored by the Amalgamated Transit Union, Jobs with Justice, and the Institute for Policy Studies as well as the Labor Network. The date is linked to the legacy of Rosa Parks whose protest against segregated buses in Montgomery, Alabama was a pivotal event in the civil rights movement. Transit Equity Day aims to link the struggles for civil rights, workers rights, and climate justice. More details are promised soon.

I forwarded the message to a local officer and some fellow retirees in ATU Local 1287 in Kansas City and included International Executive Vice-President Javier Perez who lives in KC. I was pleasantly surprised that this led to an initial informal Saturday lunch meeting to discuss how we can approach not only transit unionists but also community, church and environmental groups. More to follow.

Twin Cities readers should check out the December events scheduled at the St Paul East Side Freedom Library.