Good While It Lasted

Our partially working, mini-vacation trip to the Twin Cities was sweet but too short. I’ve already posted my Forum presentation on Britain that was the impetus for our visit to the place I called home for twenty years. The Forum was well attended and there was a good discussion. It was also recorded for a future broadcast on KFAI Community Radio. And I was glad to again touch base with Craig Palmer, the indefatigable defacto CEO-Factotum of MayDay Books, proudly “Not Making a Profit Since 1975,” who provided the meeting venue.

I also got a guided tour by Peter Rachleff of the East Side Freedom Library in St Paul. I came to know Peter when he pulled together an effective Twin Cities P-9 Support Committee in solidarity with UFCW strikers at Hormel’s main plant in Austin, Minnesota in 1985. Then a history professor at Macalester, Peter later wrote the definitive account of the Hormel struggle, Hard-Pressed in the Heartland. 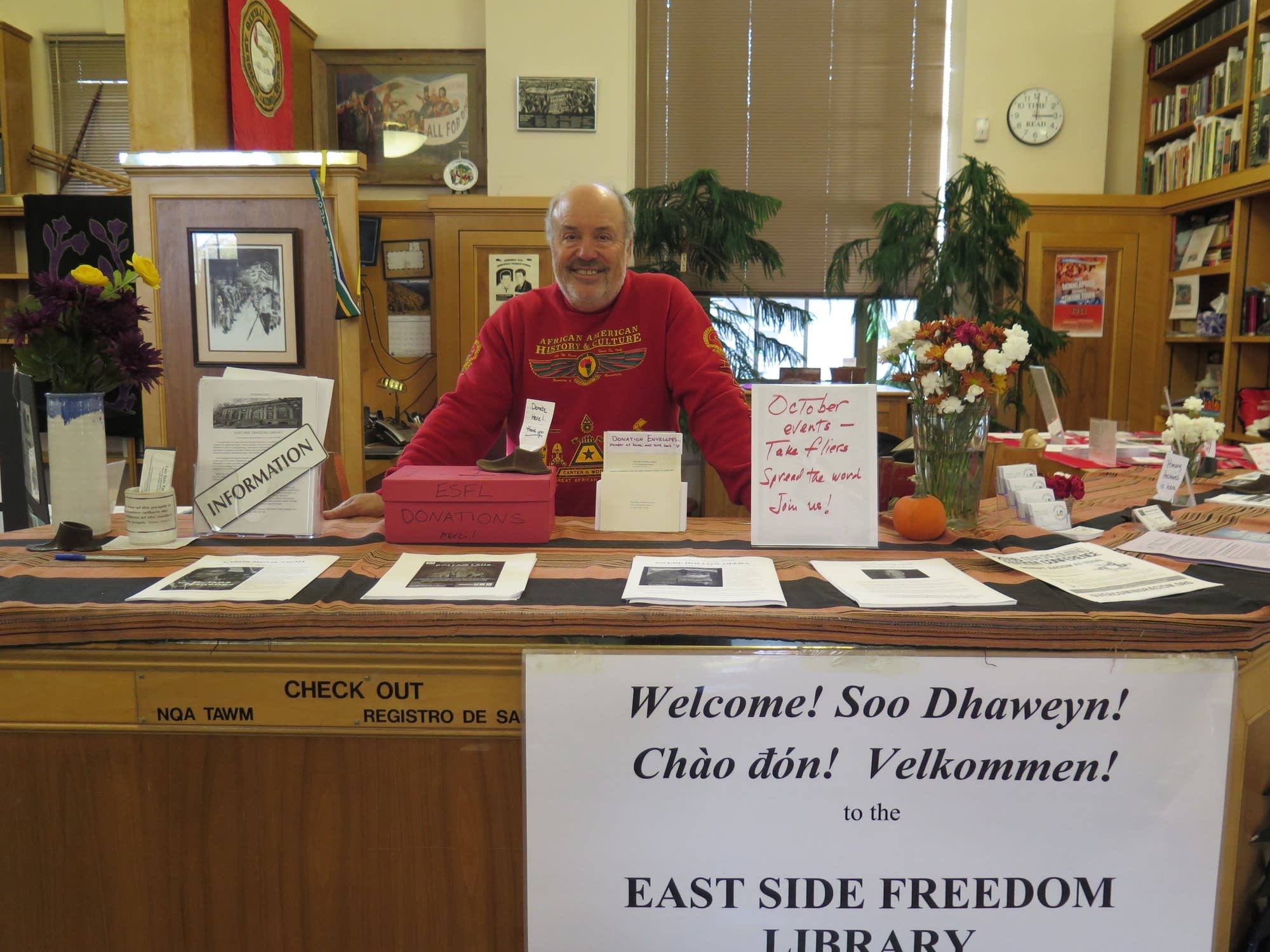 Now “retired,” Peter, along with his spouse Beth Cleary who is still a Professor of Theater and Dance at Macalester, founded the Library. A succinct statement of their mission is on their website–“East Side Freedom Library inspires solidarity, advocates for justice, and works toward equity for all.” Starting from scratch, they recruited many volunteers who transformed a former St Paul Branch Library that needed a new roof and boiler in to a well used reference library and meeting place.

Based on the public events at the ESFL advertised on their website, I have often praised the project in the WIR. Peter’s tour revealed a broader perspective. An important component of the project is to follow the history and culture of the various waves of immigrants who arrived on St Paul’s East Side from the early Germans and Irish to the more recent from Southeast Asia and East Africa. An impressive, growing collection of literature in their various languages has been assembled. But there’s more to do than reading. In addition to frequent lectures, films, music and poetry readings Karen refugees from Burma conduct classes in weaving. A basement wall supports a mural. The Library has hosted two Union Job Fairs. One volunteer even developed a board game based on the 1934 Minneapolis Teamsters strikes. Just this tour, and a chance to talk to my old friend Peter, more than justified the thousand mile round-trip car journey.

My wife Mary peddled a lot of miles on a rental bicycle including a stop at a “modern” art museum she knew wasn’t my cup of tea. But my old comrades Dave and Bud also took both of us to an interesting museum of Russian art that included an exhibit of Realism in the Soviet Era—right up my alley. Friends also generously made sure we didn’t go hungry—including our first pleasant exposure to Kurdish food.

Mary and I can’t both be gone without our good KC friends Jeff and Tony caring for Mary’s cats and garden. Now suitably inspired and refreshed, it’s time to pay the price of “catch-up.” The struggles for class and climate justice take no breaks and it’s back to work on the keyboard.

Not Just Our Imagination

A cogent article in the New York Times was headlined—It’s Not Your Imagination. Summers are Hotter. I won’t have any problem selling that to Kansas City readers. We’ve experienced wretched heat waves occasionally punctuated by violent storms and torrential rains–leading to massive power outages, significant wind damage to homes and vehicles, and flooding that destroyed a number of small businesses with accompanying job loss.

But our woes in the Midwest don’t compare to the massive wildfires in the western USA, Portugal, Corsica—and now the south of France from the port city of Marseilles to Nice on the Riviera.

Nor are we suffering the extreme prolonged droughts that have led to deadly famine in East Africa and water shortages in Italy sparking demands to turn off the magnificent fountains in Rome—some that have been running for millennia.

Hot summers are common in most of Pakistan—but not the life-threatening 130°F temps recently recorded in a land where air conditioning is as rare as an honest politician.

Greenland has always appeared in satellite photos as almost solid white because most of its surface has been snow covered deep ice. Now it has a greenish tinge reflecting the presence of algae as the ice shelf melts in to the sea.

The Times article is largely based on data analyzed and graphed by the most prominent climate scientist—James Hansen, more or less forced to retire from NASA, now a professor at Columbia University. He effectively argues these hotter summers are the opening stages of palpable global warming that threaten dangerous, irreversible climate change. He started predicting these trends decades ago and warning the principal cause of this phenomena is the release of greenhouse gases proliferating through the capitalist mode of production since the Industrial Revolution.

Prevailing science recognizes that the greenhouse gas doing the most long term damage to our biosphere is carbon dioxide released by burning fossil fuels. This is disputed by deniers who insist that any change in climate is “natural,” beyond our ability to do anything about it.

But scientists have adapted a method long used by geologists and archaeologists to determine the age of things to now identify differences separating burned fossil fuels from carbon dioxide emitted by all other sources.

As explained in a NYT Op-Ed piece by environmental journalist Hillary Rosner, scientists can search CO2 for the presence of a rare heavy radioactive isotope known as Carbon 14. It decays over time and after being buried for millions of years no longer exists in fossil fuels. CO2 found with no Carbon 14 certifies it is the result of human economic activity. That was the method used in setting the goals of the Paris Climate Accords.

Of course, such analysis is a formidable task. Two-liter air samples are collected by volunteers from all over the planet and delivered to the U.S. National Oceanic and Atmospheric Administration and a few similar institutions elsewhere. A 12-ton piece of equipment known as a high-precision accelerator mass spectrometer searches for any traces of C-14. More of them are needed to precisely track sources of fossil emissions that could, and should be eliminated.

But the title of the informative Times piece is The Climate Lab That Sits Empty. It refers to a locked facility at the University of Colorado Science Center in Boulder that was slated to join the C-14 project. Instead it has remained without a spectrometer or scientists for five years awaiting approval of a piddly five million dollar appropriation from Congress—chump change in expenditures—that won’t come any time soon.

Most people don’t read the Science or Op-Ed pages of the New York Times. The agenda for political discourse is being dictated by a wide range of attacks on the working class by a White House as ruthless as it is incompetent as our planet grows hotter, and our options diminish.

Still, some progress on climate awareness and action has been registered. Beginning last year several important unions joined climate activists in solidarity with Tribes trying to block construction of the Dakota Access pipeline. In April the March for Science and a week later, the March for Climate, Jobs and Justice, brought hundreds of thousands in to the streets around the world and in the USA. When Trump reneged on the paltry Obama goals submitted in Paris polls showed about sixty percent were opposed.

Just over the past few weeks, 350.org and the Labor Network for Sustainability collaborated on a short series of Webinars to educate activists on both climate science and the Just Transition strategy for creating good jobs as we fight global warming. Those trained need to train many more at union gatherings, on campuses and community meetings.

We have many battles ahead but none are more important than saving our biosphere. Climate justice is a working class struggle on behalf of humanity’s future. This is not the first such appeal I’ve made and as long as I remain cognizant and capable of two-finger typing it won’t be the last. It is one battle we cannot afford to lose.

This Monday, July 31, I’ll resume posting links to stories on our companion Labor Advocate news blog and until further notice will return to a regular weekly schedule for the WIR.