A recent article in the Guardian begins, “The US spends more money on healthcare than any other wealthy nation. But it hasn’t resulted in better health.” It includes an OECD chart comparing private and public health care spending, and average life expectancy in 30 industrialized countries.

In the USA last year the average person spent 4,571 dollars in out of pocket health care expenses—a figure five times higher than the OECD average. When you add in public spending for programs such as Medicare, Medicaid, and the VA, the per capita health spending was 8,995 dollars—unrivaled world leader.

But in the measure of life expectancy the U.S. 78.8 years was number 25 in these rankings. Japan topped out at 83.9. Our neighbors in single-payer Canada have an expectancy of 81.5. In Britain where most health care is still socialized in the National Health Service, and there is outrage that under Tory austerity and privatization measures annual out of pocket costs have risen to 804 dollars, Her Majesty’s subjects can expect to live to 81.

As the Republican majority in Congress struggled to repeal and/or replace the hydra-headed Affordable Care Act, actions by unions and other health care advocates appeared to be on the brink of winning single-payer legislation in the most populous of the United States. This would not only have been a big victory for the nearly 40 million residents of the Golden State; it would have established a viable alternative to both terrible ObamaCare and even more horrible TrumpCare, on state levels and nation wide. 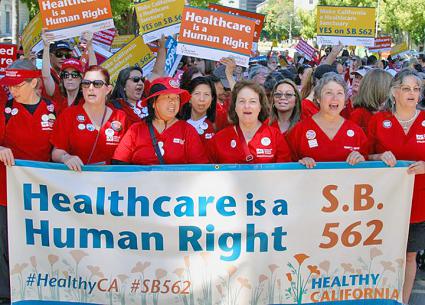 But after the Healthy California Act passed the California Senate 23-14, it was bureaucratically consigned to purgatory–not by evil Republicans but the liberal Democrat leadership. Assembly Speaker Anthony Rendon announced, “SB 562 will remain in the Assembly Rules Committee until further notice.” His move was backed by Governor Jerry Brown.

Rendon dismissed SB 562 as a lofty statement of principles, not serious legislation. He hammered away that the bill purportedly costing 400 billion dollars included no dedicated funding sources and would require unacceptable tax hikes.

It would have undoubtedly been better if the authors of SB 562 had more fully spelled out the cost benefit of single-payer with an explanation of where the money would come from. Economist Dean Baker once did such a detailed budget Briefing Paper for the even much more comprehensive national Labor Party Just Health Care campaign. Still, Emma Wilde Botta writes in Socialist Worker,

“Researchers at the University of Massachusetts Amherst looked at the fiscal impact of single-payer in California and proposed a way to fund the program. Their study estimated that the legislation would reduce overall health care spending by about 8 percent compared to the existing system–with massive cost savings for individuals and small businesses–even as it expanded coverage for the estimated 3 million uninsured.

“So while SB 562 may not include specific funding, there is no doubt that single-payer can be funded in California–and save state residents money to boot.”

An additional rationale cited by Rendon was the need to concentrate on defeating TrumpCare. Instead of counterposing popular single-payer to Trump’s paying for tax-cuts for the the rich by expropriating health care spending for the poor, elderly and disabled, the Dems across the country will continue to defend the discredited Affordable Care Act—maybe even agreeing to some “fixes” acceptable to “moderate” Republicans. Like the insurance and drug robber barons they have so faithfully served, the Democrat Establishment is not in business for our health.

Socialized medicine in Britain, and single-payer in Canada, were won by labor parties. That’s the missing prescription for curing sick U.S. health care. There are no acceptable generic equivalents.

The widely used truncated quote from the opening of a Tale of Two Cities—“It was the best of times and the worst of times”–aptly describes the present conjuncture of jobs and wages in the world’s biggest economy.

An early Breaking News headline on the New York Times website Friday morning about the June jobs report gushed “U.S. Labor Market Roars Back.” Later editions mellowed a bit to “U.S. Job Growth Picks Up the Pace, but Wages Lag Behind.” The Wall Street Journal was even more reserved from the beginning–“U.S. employers are churning out jobs unabated, but the inability to generate more robust wage growth represents a missing piece in a largely complete labor recovery.”

Some job growth is palpable. There are localized shortages of skilled trades in construction. This is due not only to an up-tick in building but also retirement of “baby boomers.” But the middle-aged boomers still too young to retire, who have had little or no work since losing good manufacturing jobs over the past decade–said to be Trump’s base–are not likely candidates for years-long apprenticeships. Neither are many Millenials who spent a fortune getting the college degree they were told would lead to a good career. The trades are paying a price for a lost generation.

After a record boom in auto sales in recent years reductions in that industry have begun and many more are expected. There are big layoffs in retail, Microsoft is eliminating 4,000 jobs, and many in the public sector and on college campuses are also taking a hit. And the Wall Street Journal reports that the Keystone XL pipeline—ruthlessly driven through by Trump who promised many jobs—may not be activated after completion. With the glut in today’s oil market few are interested in the additional expense needed to convert Tar Sands bitumen in to synthetic petroleum.

Trump’s effort to keep good jobs in America has had little substantive success. Nabisco is still moving jobs to Mexico. The maker of the iconic American motorcycle Harley-Davidson, who once arranged a photo op with Trump admiring a HOG on the White House lawn, is also offshoring work—not to Mexico where they might still be pestered by troublesome unions–but to Thailand.

Inadequate stagnant wages accompanying a near record length recovery from the Great Recession ls no mystery either. Most job growth is still in health care, financial services, and food/hospitality—a mix of some highly paid professionals with mostly working poor. While some employers are offering more for skilled workers who unfortunately don’t exist, most are still seeking concessions in union contracts and rely heavily on part-time and temp workers who get no health or retirement benefits. The recent membership rejection of a tentative CWA agreement for 17,000 California and Nevada AT&T Wireless workers was sparked by the company demand that workers pay 29 percent more for health coverage.

When unorganized low wage workers seek improvement through a higher minimum wage the bosses warn they are pricing themselves out of work. You may have encountered a widely-publicized study by economists at the University of Washington that argues that the pioneering municipal minimum wage in Seattle has eliminated many jobs. If you have the patience to follow the language of the “dismal science,” the Economic Policy Institute has done a thorough job in demolishing this flawed study.

The impressive state and municipal minimum wage victories won by the Fight for 15 and their allies have been almost the sole area of wage gains for the working poor. Some cities, including just this month Minneapolis and St Paul, have also established minimum sick and “safe time”days for all workers.

Trumpite controlled state legislatures have taken to enacting “preemption laws” forbidding such local efforts beneficial to workers, some like Missouri being challenged in court. Still other legislatures have begun to repeal state Prevailing Wage laws that in effect require union rates on construction projects that receive government subsidies.

Clearly low, stagnant wages that seem to defy the “natural” tendency of wage growth during relative labor shortage are the result of conscious, tenacious ruling class bargaining and political policies.

We Are Not Alone

The policies of American bosses and bankers are not unique. They have been part of a restructuring of world capital over the past several decades that some call neoliberalism, others Globalization. While there are still some tense rivalries between the various capitalist powers they have attempted to maintain their class solidarity against the toilers of the world. They have established some hierarchical formats such as the just concluded G20, and the still more elite G7.

Trump has become the rogue elephant in the room at these gatherings—and in more informal ones in Trump’s absence among the top echelons of the American ruling class. They believe his America First alt-right agenda is at best premature and likely counterproductive. His reckless statements and easily refuted lies call in to question his ability to govern.

But we can’t count on his class siblings to protect us from this dangerous bigoted, egotist bully. We have to rely on the great inherent power of our class. We can learn some valuable lessons from the working class upsurge in the second biggest English speaking country. The resurgence of the trade unions and Labor Party in Britain will be regularly covered in news stories posted on our companion Labor Advocate news blog as well as in the WIR.

I often remind Twin Cities readers about their unique resource—the East Side Freedom Library in St Paul. I’m happy to report that I will soon be able to visit this treasure I’ve admired from afar in person.

As part of the same brief, working vacation, I have gratefully accepted an invitation from Twin Cities Socialist Action to speak at a Forum on Where Is Britain Going? It takes place Thursday, July 20, 7PM, at another Minnesota jewel—MayDay Books.

Unless there’s some truly momentous development, this will be my final WIR before beginning my vacation break. You can expect the next near the end of July.