It’s not one of the fun mysteries like those solved by Sherlock Holmes or Nero Wolfe. Like an old episode of Columbo, we know the culprit before all the clues are revealed.

According to voluntary reports from every country, carbon emissions from burning fossil fuels appear to have stabilized. Yet carbon dioxide accumulation in the atmosphere’s greenhouse layer is still growing—and average surface temperatures on both land and sea continue to rise.

No scientist is saying this means that the benefit of emission reduction is worthless or exaggerated. Quite the contrary—their consensus remains we need to get as close to zero as we can as soon as possible–and I’ll get back to that. But the apparent anomolay verifies fossil fuel emissions have triggered other additional release of greenhouse gases that are likely to continue for some time even after a much more massive conversion to clean renewable energy is accomplished.

As always, most scientists want more data before offering definitive answers–but my lay “gut” tells me that what some see as a counter intuitive puzzle is almost certainly the result of a combination of insidious factors.

First, it is likely that some of the national reports are inaccurate, a few even fudged, and that fossil emissions haven’t yet actually stabilized. The U.S. National Oceanic and Atmospheric Agency is a leader in tracking both emissions and accumulations and could give us more clues—however, Trump’s budget will debilitate NOAA. 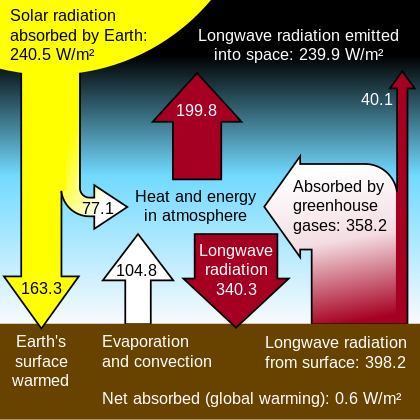 But cooking the books is probably a minor factor in cooking our planet. It’s long been understood that the effects of global warming have been partially mitigated by natural carbon sinks. Plants—and especially forests—are estimated to inhale about a quarter of CO2 emissions.

But there are finite limits to their storage capacity. As they max out they can re-release excess CO2 back in to the atmosphere. Of course, the same thing happens on an accelerated scale when trees are chopped down, and cut up for lumber.

Particularly devastating is the clearing of old growth forests in places like Indonesia—and above all, the Amazon in Brazil. That’s a double whammy—losing the mammoth carbon sink and releasing the carbon long stored in it. Land grabbers in Brazil have murdered indigenous peoples and environmentalists not so much for lumber—they clear-cut mainly in order to grow soy beans for export to China.

Seventy-one percent of the Earth’s surface is covered by water. The oceans and the Great Lakes are currently carbon sinks on a par with land plant life—about a quarter of the total. At one time they absorbed nearly twice as much. But the “dilution solution” requires a gradual mixing of CO2 to go increasingly deeper—now below 500 meters. This has an impact on all living things in the sea.

Of course, warmer temperatures are also expanding the volume of water leading to rising sea levels that unchecked will eventually inundate coastal regions that are home to hundreds of millions.

In addition to release of sequestered carbon dioxide there has been a big up-tick in a many times more potent greenhouse gas—methane. It’s treated like a waste byproduct in gas and oil fracking. Even a too little too late Obama rule requiring measuring methane pollution was immediately killed by the Trump administration. As warmer temperatures that have already opened the Arctic Ocean to shipping also thaws the deep PermaFrost in Canada, Alaska, and Siberia, it’s expected enormous quantities of trapped methane will be released. While it disperses in decades rather than the centuries for CO2, decades is enough to do a lot of damage.

All of these current diverse, dangerous aspects of climate change in a purported period of “emission stability” reminds me of a long-running skit during the early days of Saturday Night Live. When the frightened regime left behind by the Spanish fascist dictator Franco struggled to find a way to finally admit the Caudillo was dead, Chevy Chase reported the news that Franco’s condition was “grave but stable.”

Stability is a positive attribute when applied to structures or human behavior. But the present best case stabilized greenhouse emissions is still a mortal threat to the biosphere that sustains all living things. Franco deserved his eternal “stability”–we and our progeny are entitled to better.

In a recent article in Nature, prominent climate scientists predict that we have only about three years to start implementing far-reaching measures needed to stop global warming short of a historic rise of 2C that would register substantial, irreversible damage to our biosphere. Rather than celebrating “stability” they argue present emission levels must be treated as a peak ushering in steady, rapid decline. They go on to describe goals on six fronts that can slow and stop global warming—Energy; Infrastructure; Transportation; Land; Industry; Finance.

Their science and technology seems to me to be just what the doctor ordered for saving and healing a human-friendly planet. But while their physical science is undoubtedly achievable its economic and political implementation within the framework of the world capitalist market is not.

The historic interaction between capitalism and nature has always been contentious. In addition to explaining the capitalist economic forces at work, Karl Marx noted early on in the nineteenth century what the present day Marxist John Bellamy Foster calls the metabolic rift—but that’s a topic for another time.

Today, most capitalist governments acknowledge the climate change crisis. But their response is mainly through familiar market and fiscal measures such as carbon price, carbon tax, carbon offsets, and subsidies to private producers and consumers of solar, wind, and other alternatives to fossil fuels. These methods are the foundation of the voluntary goals for reducing emissions in the 2015 Paris Climate Accords signed by all but two countries.

The compliance results eighteen months on have been less than stunning and most scientists believe that even if all Paris goals are met they won’t be enough to meet even the backup goal of keeping historic warming below 2C.

The June 1 withdrawal of the government in the world’s biggest economy—and second biggest greenhouse polluter—threatens to make that likelihood a certainty. The G20 industrial capitalist countries meeting this week in Hamburg will promise to increase their commitments to help pick up the slack and many U.S. states and cities are also pledging to do more in defiance of the Denier-in-Chief. But even if seriously pursued, these gestures cannot overcome the climate wrecking policies of the richest and best armed nuclear power.

The urgently needed measures advocated in the Nature article and other scientific papers require planning and implementation on a global scale—essentially political and social tasks. It will mean abandoning major sources of profit, socializing major industries and finance and operating them under worker management, and redirecting production and distribution to sustainable needs.

It is not a perverse sense of patriotism to recognize the decisive battles to accomplish this transformation will be fought in the USA. Of course, this is not the only fight we must engage—but it is overarching. To paraphrase a motto of the Labor Network for Sustainability, you need a living planet to earn a living.

I wish our American readers a Happy Independence Day. That was America’s First Revolution. The Civil War became a Second Revolution to eliminate slavery. While hopefully not bloody as those two, the future of human civilization depends on a Third to achieve class and climate justice.