A Silent Majority No More

Whether toiling for wages, looking for a job, retired, or “stay-at-home moms,” women are a majority of the working class. That means they face all the same challenges as the rest of our class.

But they also suffer additional burdens of gender oppression. In the eyes of many, today’s descendants of the Biblical Eve continue to share her culpability for Original Sin. In some early American colonies women were sometimes persecuted as witches.

Capitalism saw no profit in the super-natural but found females to be a source of super-exploitation through cheaper labor in the workplace and uncompensated labor in household and child rearing tasks.

This massive disguised theft, limiting the necessary “living wage” to maintain and reproduce our class, was explained by Marx’s collaborator Frederick Engels and has been updated and developed more fully by successive generations of women socialists such as Clara Zetkin, Evelyn Reed, and Barbara Ehrenreich.

Exposing and combating this dual oppression of working class women is what motivated the Socialist International to establish an annual International Women’s Day more than a century ago. The IWD with a women’s strike theme this past Wednesday generated actions big and small in more than fifty countries—including the USA for the first time in many years. Among numerous just demands, three main issues seem common to all:

* The right of women to control their own bodies

* Closing the “gender gap” in wages

The first two are not inherent deal-breakers for the ruling class. Such subjugation is useful to them mainly as a way of preventing liberated women winning the game-changing third. Equal pay for comparable work—that would mean a 22 percent raise for American women–would be a giant reversal of the trend of increasing concentration of wealth under control of the top one-tenth of one percent of society.

Betty Friedan, author of the seminal Feminine Mystique, and the first president of NOW, had earlier worked on an ultimately successful UE campaign at General Electric around the slogan—No Rates Below Common Labor. This odd formulation addressed the injustice of male janitors pushing a broom earning more than women assemblers. 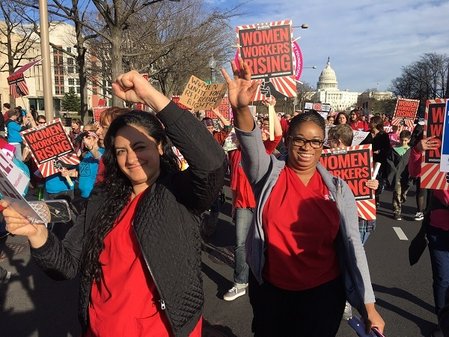 Such demands should still be pursued by our unions. Unionized women earn 31 percent more than their unorganized sisters. Washington DC unionists led the biggest American strike action on Wednesday. But most workers don’t have a union and even GE has closed, or sold off, nearly all of their manufacturing plants in the USA.

“Iceland’s government announced on Wednesday it will introduce legislation in the country’s Parliament this month that will require any employer with 25 workers or more to obtain certification that it pays men and women equally for work of equal value.

“‘Equal rights are human rights,’ said the country’s Equality and Social Affairs Minister Thorsteinn Viglundsson. ‘We need to make sure that men and women enjoy equal opportunity in the workplace. It is our responsibility to take every measure to achieve that.'”

It remains to be seen whether this important partial reform can be enacted and enforced. If nothing else, it shows the influence of a long thriving women’s mass movement and political action on this little piece of Europe in the North Atlantic.

The movement for women’s liberation in the USA was resuscitated by the election of a misogynist sociopath to lead the “Free World.” It has quickly gone beyond anti-Trump resistance to retrieve other issues long simmering on the proverbial back burner. The global solidarity expressed around the January 21 marches and the IWD now needs to be channeled in to rebuilding an ongoing mass movement that can educate, agitate and organize for the liberation of women in equal partnership with the liberation of the working class.

View From the Third Floor

The view in two directions from my modest and cluttered third floor corner office sometimes inspires my climate remarks. As I write, Kansas City is experiencing our first snow since January 5. More anomalous is that during January-February Seattle got more snow than Minneapolis while Chicago had none.

Our local snow is accumulating on splendid blossoms of Bradford Pears in Mill Creek Park and my wife’s front yard Daffodils. Their unseasonably early blooms were triggered by long stretches of 60-70F temperatures but are now threatened by hard freeze temps the next few nights. Red Flag warnings had been issued because the combination of strong winds, heat, and parched rural vegetation sparked massive wildfires in neighboring Kansas and other states. To top it off, several destructive tornadoes hit parts of the metropolitan area this week.

You don’t need to be a weatherperson to know we can no longer depend on long established seasonal norms—but 95 percent of meteorologists believe growing unusual and destructive weather patterns are linked to human-caused climate change. Some of the headlines of stories I posted on our companion Labor Advocate news blog since the last WIR should be ringing alarm bells if not cranking up sirens: Arctic sea ice could disappear even if world achieves climate target; Climate change impact on Australia may be irreversible; Trump to Undo Vehicle Rules That Curb Global Warming; Nearly 2 Million Kids Die from Pollution Each Year; Ranchers assess damage after wildfires in 4 states; and Head Stacks Agency [EPA] With Climate Change Skeptics.

There was one posting this past week that offered some good news–Americans are confused on climate, but support cutting carbon pollution. A survey by a Yale project on climate communication found:

* 53 percent correctly believe it is the result of human activity

This is a significant positive shift in public perception of the climate crisis, squarely at odds with the Trump administration’s denial. But it is also marred by confusion and lack of urgency—which means we have a lot more to do in education and motivation.

The next big opportunity to rally support for meaningful, urgent climate action will be the April 29 People’s Climate Mobilization, with a mass march on Washington and support events in nearly every city, town, and campus across the country.

The Service Employees International Union, Amalgamated Transit Union, National Nurses United, Communication Workers of America, the Blue Green Alliance, and the Labor Network for Sustainability are part of the national Mobilization Steering Committee. So are the NAACP, Sierra Club, Public Citizen, and the Union of Concerned Scientists. And I’m proud to say that Kansas City Labor Party Advocates is listed among more than 500 Partner organizations.

And the Winner Is…

A tip of the hat and a slap on the back are in order for the St Paul East Side Freedom Library co-founders Beth Cleary and Peter Rachleff and the library’s dedicated volunteers. They have been awarded this year’s John Sessions Memorial Award. Workday Minnesota describes the honor,

“The award, sponsored by the Department for Professional Employees, AFL-CIO recognizes a library or library system which has made a significant effort to work with the labor community and by doing so has brought recognition to the history and contributions of the labor movement to the development of the United States.”

They go on to say,

“The mission of the East Side Freedom Library is ‘to inspire solidarity, advocate for justice, and work toward equity for all.’ As an independent library located in the Payne-Phalen neighborhood of St. Paul, Minn., the ESFL has successfully built relationships with organized labor and community groups that facilitate the empowerment, learning, and engagement of working people.

“Since the library was established in 2013, co-founders Peter Rachleff and Beth Cleary have secured a permanent home in a former Carnegie Library, built a collection of 15,000 items, and hosted more than one hundred programs and 6,000 visitors.”