A Chain of Linked Anniversaries

Somewhat like International Workers’ Day celebrated around the world on May 1, March 8 International Women’s Day is a global event with American—and socialist—roots. IWD hasn’t been observed through mass actions by worker and/or feminist groups in its country of origin for decades. This year will be different. After reviewing some history, I’ll deal with the IWD resurgence taking place this Wednesday.

The first Women’s Day was organized in 1908 by socialist women fighting for the right to vote and promoting organization of women workers through the Women’s Trade Union League. The following year they organized a mass demonstration in New York City in preparation for a major garment worker strike. Their actions inspired a 1910 Women’s Conference of the Socialist International to proclaim an annual coordinated International Women’s Day, beginning in 1911. 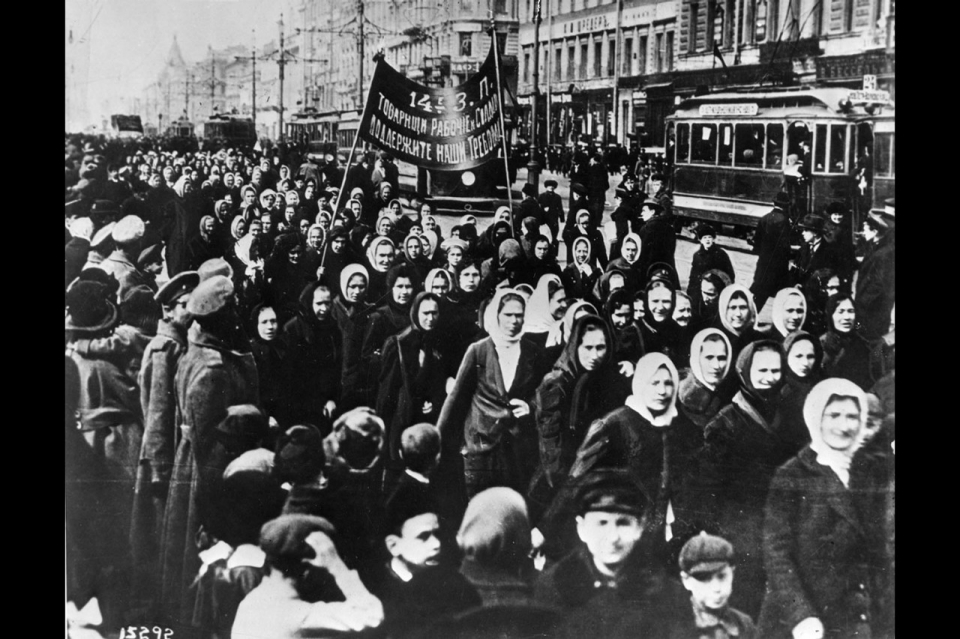 In 1917, a war-time IWD demonstration, demanding peace and bread, in Petrograd (later Leningrad, now St Petersburg) was attacked by police and became the launching pad for the revolution that overthrew the Russian Czar. Because the Czar had clung to a calendar that had been replaced in most of the rest of the world, it became known as the February Revolution. Eight months later the Bolsheviks completed the October Revolution that established the Soviet Union. IWD was then established as an official national holiday by the Soviet government.

Many countries tip their hat to Women’s Day but in most cases it’s a “holiday” on a par with Arbor Day in the USA. Some florists and greeting card companies market products for the occasion. Only in countries where there are strong socialist parties, unions, and women’s organizations are there still consistent big marches and meetings on March 8.

The Second Wave of Feminism that emerged in the late Sixties led to a brief revival of celebrations of IWD in the USA. They were part of a busy calendar of demonstrations called by groups like the National Organization for Women founded in 1966—which became a truly mass membership organization—along with the Coalition of Labor Union Women launched in 1974. These actions in the streets contributed to the political climate needed to win the Roe v Wade decision legalizing abortion.

They also promoted the Equal Rights Amendment. But just enough reactionary state legislatures prevented ratification of the ERA. After that setback, the biggest organizations like NOW and Planned Parenthood devoted almost all of their political resources to lobbying and supporting sympathetic major party candidates in elections. They shared this strategy with the labor, civil rights, and even much of the peace and environmental movements. And all those movements are now under the greatest attacks in generations.

The Electoral College victory by the second place candidate last November did not lead to general demoralization of those targeted by the triumphant alt-right. Instead it has sparked the biggest non-electoral political upsurge since the 1970s–erupting from below.

Women have been first and foremost so far. Initially bypassing traditional leaders by using the Internet and social media, those eager to fight back pulled together not only a massive Women’s March on Washington the day after Trump’s inauguration but also solidarity actions across America—and on every continent. A good description of these remarkable events by Ann Montague and Michael Schreiber, The Biggest Protest In U.S. History; Women’s Marches Draw 4 Million, was published in Socialist Action.

The call for women of the world to strike and demonstrate this Wednesday originated in other lands even before the election of Trump. It appears to have been initiated by rejuvenated women’s movements in countries such as Argentina, Ireland, Italy–and Poland.

The Polish movement recently won a stunning partial victory in that country that, like the former Soviet Union, has gone through a CIA-AID-promoted capitalist restoration–also supported by the AFL-CIO leadership at the time. Abortions were once free on demand through the national health system. Along with other losses in health care, there’s been a steady chipping away on abortion access. Last October, a women’s strike and mass demonstrations beat back an effort by the alt and religious Right to criminalize all abortion—and they are looking to do a lot more.

American activists and intellectuals relayed the strike call to women and supporters in the USA. Two of those signers–Cinzia Arruzza, an assistant professor of philosophy at the New School and Tithi Bhattacharya, an associate professor of history at Purdue–submitted an Op-Ed piece appearing in several publications including the Anglo-American Guardian under the title Strikes Were a Part of Women’s Day Before. With Trump They Will Be Again. While explaining the working class origins of International Women’s Day and the need to reclaim that tradition they say,

“The immense women’s marches of 21 January and their resonance across the country demonstrated that millions of women in the United States are finally fed up not only with the blatant misogyny of the Trump’s administration, but also with decades of continuous attacks on women’s lives and bodies.

“We are united by the awareness that Trump’s administration is a symptom of a larger problem: the outcome of decades of neoliberal policies, of transfer of wealth to the richest, of erosion of labor rights and of labor dignity, of neocolonial wars of aggression, of the institutional racism and of the structural misogyny ingrained in US society.”

They close–“This is the history, of women self-organizing and fighting for economic and political rights, that the United States has erased from memory. We will not just demand bread, for we also deserve roses.”

It is difficult to predict—or even tally—the numbers of American women who will actually strike March 8. Many more, along with male supporters, will undoubtedly participate in local marches, rallies, and meetings. It’s unlikely this Wednesday’s actions will be on the same scale as the historic four million who mobilized just a few weeks ago. But the revived IWD will be educational as well as agitational around both long range goals and current hot button issues. It will signify the ongoing movement is viable, with a developing program and perspective going far beyond denunciation of a genital grabber in the White House.

Since nobody else will, I will mention one more micro-link in the chain of anniversaries associated with March 8. I chose that easy to remember date in 2000 to launch the KC Labor website. It was a crude effort by a novice with no formal training in IT—and I suppose it still is. But seventeen years is a long life span for any site, especially one depending on volunteer labor and reader donations to survive.

That first day we had eight visitors. We now average 70 times that number of unique visits every day. Most are from the USA but today’s stats show visitors from France, Germany, Poland, Portugal, Canada, Ukraine, Holland, United Arab Emirates, and Brazil.

I want to thank all readers—a few going back to that first day 17 years ago—for your support in so many ways.

* The Guardian reports, “The UN’s climate chief has been unable to secure a meeting with the US state department as Donald Trump’s administration mulls whether to withdraw the US from the international climate effort. Patricia Espinosa, executive secretary of the UN Framework Convention on Climate Change (UNFCCC), is currently in the US and has sought a meeting with Rex Tillerson, the secretary of state, and other officials over the commitment of the new administration to global climate goals.”

* The Missouri Supreme Court unanimously ruled that a St Louis city minimum wage ordinance passed by the Board of Alderman is legal. This also removes any excuses of the Kansas City Mayor and City Council for continuing to block an even stronger minimum in my hometown. It is a blow to ALEC’s national campaign in state legislatures to outlaw municipal wage laws and also efforts to ban local sick leave laws in Minnesota.

* From the Christian Science Monitor–”A class action suit alleging that as many as tens of thousands of undocumented immigrants were coerced to perform free labor in a privately operated Colorado detention center has been given the green light to move forward in a federal district court.”

* With the Trump Dow-Jones a raging bull, the Federal Reserve decided it was time to make credit card use, car loans and home buying more expensive with the first of an expected three hikes in interest rates in Trump’s first year.

* The Labor Fightback Network has issued a call for its Third National Conference, to be held in Cleveland July 21-23. The WIR will pass along more details as they become available.

* My only problem with the subheads in the monthly e-mail blast is that I live 438 miles from St Paul–Art thrives at East Side Freedom Library!; Tempests in Tea Pots: Listen, Talk, Act; Alice Paul & The 1917 Suffrage Pickets; spearwave No. 4 (Art Exhibit and Reading); Down in Mississippi: A Gospel Play with Music; And yet still more! You can find all the details of these teasers on the East Side Freedom Library site.