Today we celebrate a New Year–and the anniversary of the victory of the Cuban Revolution. I apologize for being later than promised with this WIR. I am pleased to announce that I’m reviving postings on the Labor Advocate News Blog.

In two of the three years since adoption of the “historic” Paris climate accord global greenhouse gas emissions have risen substantially. Instead of Paris hopes that fossil burning would peak in 2020 it is now feared it may continue to grow until 2030, perhaps even 2040.

United Nations Secretary-General António Guterres hit a coffin nail on the head when he told 14,000 delegates and entourage at a recently concluded UN conference,

“It is plain we are way off course. We are still not doing enough, nor moving fast enough, to prevent irreversible and catastrophic climate disruption.”

Perhaps the most useful aspect of these conclaves like the one that just met in Katowice, Poland is increased climate coverage on news sites such as the New York Times, Guardian, der Spiegel, and the Los Angeles Times. Here are some examples,

“In cities that are already scorching hot, temperatures and humidity levels are rising to levels that the human body simply can’t tolerate, researchers warn.”

On October 7 the NYT reported,

“The report, issued on Monday by the Intergovernmental Panel on Climate Change, a group of scientists convened by the United Nations to guide world leaders, describes a world of worsening food shortages and wildfires, and a mass die-off of coral reefs as soon as 2040 — a period well within the lifetime of much of the global population.”

The denier-in-chief in the White House couldn’t block release of similar dire reports about climate change in the USA compiled by 13 Federal agencies as required by law. But Trump’s toadies in the U.S. delegation in Katowice found allies from Russia, Saudi Arabia, Australia, and Kuwait to prevent COP24 from endorsing these urgent pleas of science.

Nearly the entire agenda in Katowice was devoted to finalizing a Rule Book governing the implementation of the Paris accord. Most of these concern reporting progress—or lack thereof—in reducing carbon emissions in each country. Certainly there is a need for rules—which should have been in place before the delegates left Paris three years ago.

In addition to the lethargic and bungling among the counters there are also some crooks. The same proto-fascist regime in Brazil that protects those who murder indigenous and environmentalists in order to clear-cut the biggest land based carbon sink on the planet also got nabbed for trying to double-count carbon credits for the Amazon.

Of course, accurate record keeping is essential to science and I have more confidence in the honesty and competence of scientists than any other group. On the other hand, the capitalists and their political minions–who are principal reporters of raw data—have not earned the same level of trust. We don’t want our progeny to find the ruling class fiddled the books while the Earth burned.

But rules and records are secondary to the main task emphasized by the IPCC scientists–quickly transforming the world economy.

With the partial exception of Cuba, virtually every country has a capitalist, market economy. Capitalists raise money to invest in ventures that will make even more money. Despite historically low oil prices investment in fossil energy is still more attractive than wind or solar without substantial subsidies. The impact of market measures such as divestment, carbon price, and carbon tax have been negligible.

As Sean Sweeney and John Treat say in this excellent article,

“The market-focused approach to climate protection has failed spectacularly. Using ‘sticks and carrots’ policies aimed at the private sector, governments anticipated a surge of new ‘green growth’ investment that would create millions of good jobs. This did not happen. It is now absolutely clear that climate policy must shift in a radically different direction, and unions can help ensure that such a shift occurs as soon as possible.”

Sweeney and Treat are leaders in the global Trade Unions for Energy Democracy. TUED advocates socialization of all energy and operating under workers management in the public—and biosphere—interests.

The Labor Network for Sustainability in the USA recently started backing the trendy Green New Deal promoted by Greens and “leftist” Democrats. I’ll compare the two next time.

That’s all for this year.

“Right now we are facing a manmade disaster of global scale, our greatest threat in thousands of years: climate change… If we don’t take action, the collapse of our civilizations and the extinction of much of the natural world is on the horizon.”

This reminder of what scientists and activists have been warning for decades was delivered by Sir David Attenborough in keynote remarks to delegates gathering last Monday for a 2-week UN conference on climate change. Attenborough is an eminent British natural scientist who has done much to popularize science on BBC radio and television. The 92-year old has done his part in offering solutions for “the last generation who can save civilization from the climate crisis.”

The choice of venue for this crucial meeting was curious. The host city, Katowice, Poland is in the heart of a major coal producing region—and is determined to preserve that status quo. The right-wing Polish establishment shares love of coal—and much else—with Trump. Such out-and-out deniers of global warming among world leaders is rare. Cynicism, however, is abundant.

Designated as COP24, this conclave is charged with reviewing and bolstering the progress of implementation of the “historic” 2015 Paris Climate Accord. Paris adopted a primary goal of capping insidious growth of global warming since the launch of the Industrial Revolution at 1.5C–with a fall-back of no more than 2C [3.6F]. [At the time of Paris, warming had already passed the 1.0C. landmark] To meet this tardy objective every party to the deal was required to submit voluntary, non-binding pledge to reduce greenhouse emissions.

Few countries are on target for fulfilling their promises. Worse yet, it’s now clear that even if every nation met their present goal it still wouldn’t be enough to meet the 1.5/2C objective. In fact present trends are heading to a catastrophic 3C by the end of this century. 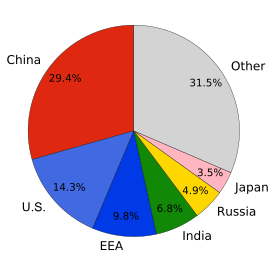 Greenhouse gas emissions worldwide are growing at an accelerating pace this year, researchers said Wednesday, putting the world on track to face some of the most severe consequences of global warming sooner than expected.

Scientists described the quickening rate of carbon dioxide emissions in stark terms, comparing it to a “speeding freight train” and laying part of the blame on an unexpected surge in the appetite for oil as people around the world not only buy more cars but also drive them farther than in the past — more than offsetting any gains from the spread of electric vehicles.

“We’ve seen oil use go up five years in a row,” said Rob Jackson, a professor of earth system science at Stanford and an author of one of two studies published Wednesday. “That’s really surprising.”

Worldwide, carbon emissions are expected to increase by 2.7 percent in 2018….

French right-wing President Macron cynically claimed his austerity tax hikes on gasoline and diesel–sweetened by the offer of a 100 euro [$114] rebate to buyers of electric powered vehicles—was really an important measure in stopping climate change. Some Greens tried to help Macron sell his scam but the big majority of workers and farmers are staunchly opposed and back the massive Yellow Jacket protests in Paris and a number of other towns. There was also a previously planned Paris climate change march of 17,000 on yesterday [Saturday.]

A coming WIR will review what emerges from COP24 and discuss the role the working class can play in the “last generation.”

From time to time the WIR has commented on the fact that while the USA spends far more on health care than any other country we lag behind many countries in some important outcomes for this spending.

For example, residents of Japan, Canada and most European countries have for decades enjoyed longer life expectancy than us Yanks. The latest World Health Organization ranking in 2015 slotted the US in to 31st place, barely nosing out embargoed Cuba. Bad as that is, over the past three years American life expectancy has actually gone down each year.

It was not long ago that the Obama liberals were advancing the complaint that old folks were living longer and depleting Social Security and Medicare. They started advising everybody to work at least until 70 and sought a bipartisan deal to slash retiree benefits.

Today’s decline in longevity is attributed to opioid addiction and suicide. These killers are not hereditary or contagious. They are often acts of despair in a sick capitalist society.

Good To Be Back

I’m trying to recover some of my old routine and send you a couple of more editions before the year-end holiday break.