Our Canadian readers sensibly celebrate Thanksgiving earlier, back when baseball was still being played. El Niño is a very angry child indeed this year and I can be thankful that Kansas City is only getting record breaking rain instead of massive snowfall that has hit all around us. I hope our luck holds up through Sunday when our local Climate Action March and Rally takes place.

I was planning on taking this holiday off, varying my usual routine, and I’m not sending you any weighty message today. I don’t offer prayers of thanks. I try to thank my loving wife Mary, currently busy preparing our traditional Thanksgiving pasta fuzil, every day. But I do want to express secular gratitude to many who have shown support for the WIR with suggestions for content and/or financial donations. In a gesture of privacy I’ll use only first names and locations in more or less east to west order:

Traven in Vermont; Andy in Brooklyn; Tom in New Jersey; Michael in Philadelphia; Mark in Maryland; Chris in DC; Bonnie and Jerry in Cleveland; Larry in Detroit; Adam and Dave in Chicago; Carl in Madison; Adam in Superior; Dave, Michael and Peter in the Twin Cities; George in Tucson; Kathleen and Tom in Los Angeles; Ann in Oregon; Joan and Rita in Seattle; Gordon and Rod in Vancouver.

And, along with the indispensable support of my spouse I must acknowledge others in Kansas City who have been helpful in so many ways: Brianna; Jeff; Molly; and my oldest extant friend and collaborator, Tony.

And last but not least—thanks to all of our readers. Without you there would be no need for the rest of us.

That’s all for this Thanksgiving.

Registration is now open for the 2016 Labor Notes Conference

The Road Through Paris Confronts Detour In the aftermath of ISIL’s murderous attacks in Paris, the French government is encouraging the residents of the City of Light to return to their normal routines of concerts and plays, dining out and strolling the boulevards. Tourists are still invited to visit the treasures of museums and landmarks like the Arch of Triumph and the Eiffel Tower. They correctly argue that to do otherwise would grant the terrorists a victory.

But like all governments who feel constrained by democracy they don’t hesitate to use terrorist atrocity to justify new repressive measures. We saw all this when “9/11 changed everything”–and thanks to Edward Snowden we have learned how some of our democratic rights were secretly violated in our own country.

This past week the François Hollande regime decreed emergency powers that included banning street demonstrations for at least three months. The first casualty of this nullification of free assembly is the giant march long scheduled in Paris next Sunday on the eve of the COP21 Climate Summit. As many as a quarter-million were expected from around Europe to demand action from the world’s governments to stop climate change short of climate catastrophe.

Alix Mazounie of the Climate Action Network France said, “More than ever, people across the world and in Paris need to stand up to say that they are fearless and that they want the right to public and democratic freedom of speech….We are in a country of free expression—that has always been the source of our power. This will be about unity, solidarity and peace, as well as climate change.”

Nicolas Haeringer of 350.org stated, “The government can prohibit these demonstrations, but our voices will not be silenced. While this makes it difficult to go forward with our original plans, we will still find a way for people in Paris to make the call for climate justice heard, and we encourage everyone around the world to join a Global Climate March and raise their voices louder than ever. There’s never been a greater need.”

As the organizers of the now outlawed march search for alternatives to get the message out, it becomes our duty in North America to redouble efforts to build solidarity actions already planned in a number of cities next weekend. You can check here to find the event closest to you.

Readers in the Kansas City area should note that there have been some major changes in the schedule that we posted a couple of weeks ago. Here are the final revisions:

The action begins at 2:45PM, next Sunday, November 29, at the Nichols Fountain at 47&Main. According to the KC ClimateCoalition website,

“We will begin with a very short march near the JC Nichols Fountain in Mill Creek Park before marching through the Plaza to the pedestrian bridge over Brush Creek (Ward Pkwy. & Wyandotte), where we’ll take a group photo. Then we’ll march to All Souls Unitarian Universalist Church (4501 Walnut) to warm up with hot cocoa or coffee followed by a rally at 4:30 with speakers representing faith, labor, environment, and community groups. We will be marching on the sidewalk and obeying traffic laws when we cross streets.”

Speakers at the church will include:

If you aren’t up for the marching you’re still welcome to come to greet the marchers as they arrive at All Souls about 4:00PM. I hope to see a lot of Kansas City readers there.

Big Three Done, Kohler Just Begun
Many observers put emphasis on the number and duration of major strikes as a gauge of worker combativeness. It’s an important measure to be sure and it’s been very low for a decade. But it misses some major shifts under way in the labor movement today.

Between the September 14 expiration of UAW national contracts with General Motors, Ford and Fiat Chrysler until the announcement late Friday that a new Ford contract had been ratified, not a single day of work was lost. Yet it was anything but smooth sailing for the bosses and UAW bureaucracy. A New York Times story opened,

“After five months of bargaining and divisive ratification votes, the United Automobile Workers on Friday completed new labor contracts covering more than 140,000 workers at the three largest American automakers…. finalizing the agreements proved to be a painstaking process, because many workers opposed the terms negotiated by U.A.W. leaders with General Motors, Ford Motor and Fiat Chrysler.”

At Ford, the outcome was unknown until literally the final hour. The results announced after bedtime for many on Friday were yes votes of 51 percent of production workers, 52 percent skilled trades, and 92 percent salaried.

Clearly these workers are no longer just happy to have a job. The industry is thriving, profits have been swelling. Disappointed with the stinginess of their “partners” many believed it was time for a quicker path to eliminating two tier wages, getting hourly raises every year, and restoring cost-of-living adjustments. The skilled trades at GM were upset about changes in classifications and work rules. There was bitterness at Chrysler over hated Alternative Work Schedules.

But this sentiment has not yet produced an effective organized opposition within the union and it fell short.

As Big Three bargaining was winding down last week 2,000 workers at two Kohler plants in Wisconsin did hit the proverbial bricks after a 94 percent rejection of the plumbing products manufacturer’s “last, best and final offer.”

In 2010, when new housing construction had bottomed out, UAW Local 833 reluctantly followed the give-back pattern set by their International union at the Big Three and agreed to a two-tier wage structure. According to the Local, under the expired contract veteran workers earned an average of 22.50 an hour while 400 workers hired since 2010 get about 12.50 on average. With plenty of work today the workers are united and determined to achieve wage parity. A Green Bay TV station reported thousands of strikers, family members, and supporters from other unions, held a mass march and rally in Kohler Village outside Sheboygan.

There’s a strong tradition in 833 of lasting “one day longer.” I remember when I was a kid in the seventh grade, and right on through high school, every issue of the Labor Beacon, and the Butcher Workman, that my dad received in the mail had a prominent display ad calling for a boycott of Kohler. A 1954 strike for a first contract was met with scabs and strikebreakers and there were frequent company complaints of violence on and off the picket line. It wasn’t until 1960 that the NLRB finally found Kohler guilty of bad faith bargaining and ordered all discharged strikers reinstated with back pay. It took five more years to reach agreement on the monetary award—3 million dollars in back wages to 1400 workers and 1.5 million to their pension fund.

Since then there had been only one strike—16 days in 1983. It will probably take more than 16 days to win a just settlement this time—but not as long as 1954.

There is yet another important battle shaping up. A give-back agreement covering 4,000 Teamsters at two car hauling companies was shot down by an 87 percent vote in October. The Teamsters bargainers have said they want to hear what problems the ranks had with their deal before going back to the table. Alexandra Bradbury offers them some clues in an excellent Labor Notes story. 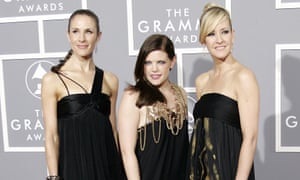 Still Not Ready To Make Nice
American readers 25 and older will certainly recall that the movement against the Iraq war was at its broadest during a several month period before the actual US-British invasion. Every city and town across the land had at least weekly demonstrations against the palpable drive to war. In Kansas City, weekly rallies took place in Mill Creek Park.

Because I was a founding member of US Labor Against the War, I was asked to chair what proved to be the last of these gatherings before Shock & Awe. I began by posing a question to the crowd of 800—are there any Dixie Chicks fans out there? The answer was a mighty roar.

This was not necessarily a critical endorsement of the music of the best selling female Country Western group of all time. It was a show of solidarity with these gutsy artists from Texas who spoke out for peace and, at a concert in London, said they were ashamed President Bush was also from their home state.

Retribution was swift and unmerciful. The Country Western Establishment is pro-God, pro-Flag, and pro-Gun—and they don’t cotton to uppity women either. Radio stations not only quit playing their songs—they set out trash barrels and invited listeners to drive by and pitch their Dixie Chicks albums in to the garbage. Some brave patriots even sent the Chicks death threats.

A few years later the Chicks released a new album that won great critical acclaim and a Grammy—but was still verboten on radio. One number was a very unapologetic and moving Not Ready to Make Nice. Now the Guardian reports they are beginning a world tour, including forty cities in the USA. I thought I better tell you because you might not hear about it on the air. If I was religious I would say God Bless the Dixie Chicks!